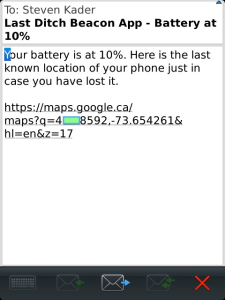 The Jared Company, a leading creator of smartphone apps, has released what may be the most useful free app for the forgetful Blackberry® user—Last Ditch Beacon sends an email with the last-known location of the Blackberry, when the battery is down to 10 percent.

According to JaredCo, 30 percent of lost or misplaced Blackberry smartphones have dead batteries. Most tracking apps need to communicate with the device in order to find them, which is impossible once the battery is drained.

Using the Blackberry GPS, Last Ditch Beacon sends an email with the last known location of the device, even if it’s low on juice—complete with a Google map link showing the approximate location.